Are You Winging It or Winning It? 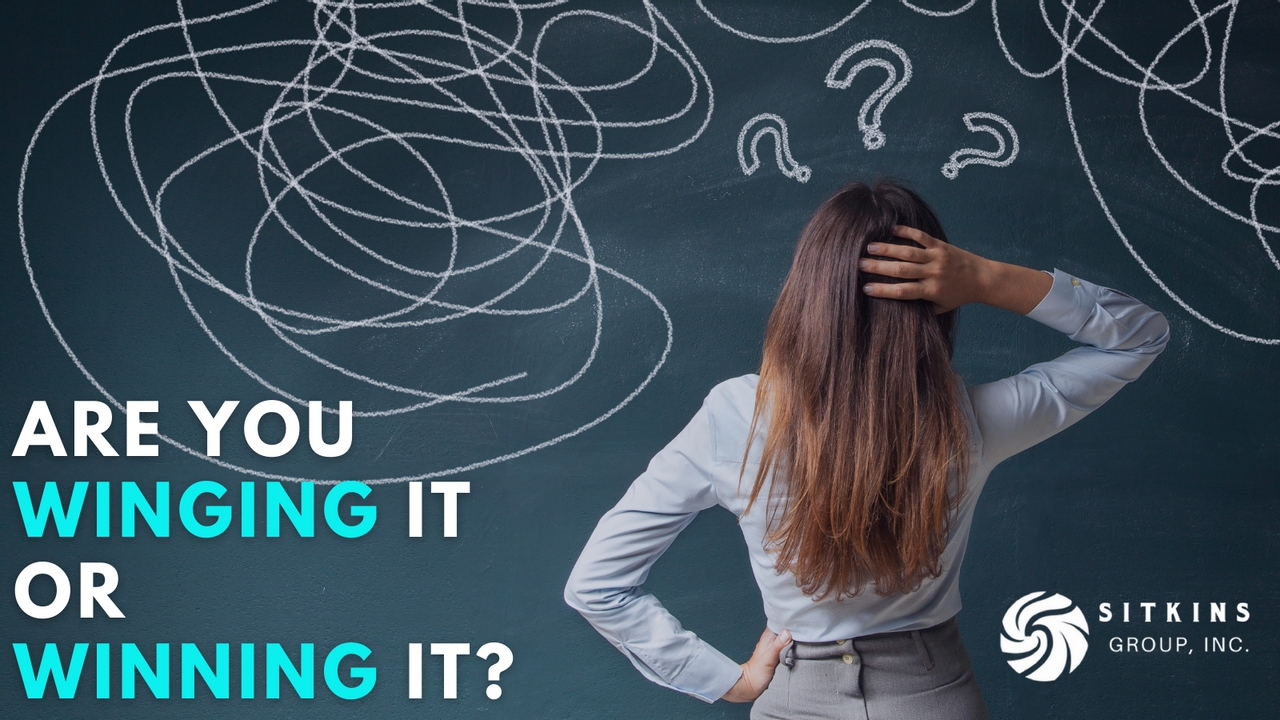 Whether or not you realize it, you are in a competition every day, either as an agency or as an individual producer. You are competing to keep your best accounts and open new relationships with ideal clients. You’ll notice I said, “open new relationships,” not “close sales.” If you’re focused on just making sales and not playing a relationship game, you’re playing a commodity game, and we know how commodity decisions are made!

Assuming you want to be in the relationship game, there are two approaches you can take. You can either wing it or win it.

I’ll never forget the time a senior producer had a BFO (blinding flash of the obvious) during one of our training programs. His eyes lit up and he raised his hand to get my attention. When I called on him, he said, “Coach, I just realized I’ve been winging it my whole career. I wonder how good I could have become if I had joined your program years ago!” His observation prompted a lively discussion among all of the attendees on the difference between winging and winning.

As I’m sure you’ve discovered, this is such a great business; you can wing it and still do okay. And if you’re really good at winging it, you can be semi-successful, as we’ve discussed before. To the outside world, everything looks perfect: a nice house, great car, and the best clubs and schools. But clearly, you’re not on the path to financial freedom. In fact, only 5% of Americans are financially free at age 65. By doing the right things, you can be part of that exclusive group.

To achieve true financial freedom, you’ve got to stop winging it and start determining the winning strategies you will implement and make non-optional. But first, we need to distinguish one from the other by defining “winging it” and “winning it” (“it” being the insurance game).

Winging it is simply showing up and reacting to incoming “arrows” all day long. These are the clicks, rings, pings, and dings that control your day and your life. While you start most days with good intentions, by the end of the day you’re thinking, “Wow—I sure was busy, but I don’t know what I accomplished.” There are too many “should do’s” that you don’t do. You stay busy trying to get ahead of a never-ending to-do list and doing tons of practice quoting and unpaid consulting. You do more order-taking than actual selling. What’s more, you’re stuck in the service trap and your time spent selling (TSS) is less than 10 hours a week. Basically, you’re a part-time producer destined to remain a semi-successful professional.

Winning it is having an effective retention rate of 99% and a closing ratio (new relationships opened) of 75% or more. WIN is an acronym for What Is Normal. What things should become normal in your agency or your book of business?

Now let’s compare winging it versus some of the key winning strategies that I teach. Based on the comparisons, I’ll let you decide if you’re a winner or a winger.

Pipelines. Wingers believe that every suspect that wants a quote is worth chasing (hey, you never know, you might get lucky). They believe that if you throw enough against the wall, something will stick. Typically, they’re sitting by their phone or their computer waiting for those previously mentioned clicks, pings, rings, and dings to create more practice quotes. That’s like sitting there waiting for the roast duck to fly into your mouth.

Winners not only know exactly what a future ideal client (FIC) looks like, they actually know who they are. Every producer has their own list of their top 20 FICs and a specific Targeted Account Strategy Plan for each. As a result, they have pipelines that are overflowing with more qualified opportunities than time.

Sales process. Wingers never practice or rehearse their presentations or pitches because they don’t have a true sales process. Instead, they show up, throw up and blow up. They believe that Look, Copy, Quote and Pray will lead them to the promised land. While that approach will get most of them to a semi-successful state, it will get them no further. Without a sales process, they’ll be stuck on a semi-successful plateau.

Winners have a defined, named, and documented sales process. It’s one they can easily explain to a FIC. They can articulate exactly what they do and how the FIC will benefit. Although a great sales process leads to broker of record/agent of record (BOR/AOR) selling, it’s not something I usually teach. I believe that the BOR/AOR is the result of a unique process and approach—something the FIC has never seen before that sets you apart from your competitors. How will you know if you have it? You’ll hear comments like, “Wow, no one ever showed me that,” “I’ve never been asked that question before,” and “I’ve never seen anything like this.” If your FICs aren’t saying those types of things, then you are not differentiating.

At Sitkins, our process consists of Define, Document and Deliver. What’s yours?

Time Spent Selling (TSS)/Red Zone vs. Green Zone. Wingers invest fewer than 10 hours a week executing true money-making strategies. As defined in several previous articles, these strategies include sales, continuations, relationship management, and pipeline development. Wingers live with the “ITB” excuse: “I’m too busy to get out there (even in a virtual environment) and sell business.”

Winners are totally aware of their Return On Time. They realize that time is their only diminishing asset and they refuse to waste it on things outside the four key money-making strategies. Their goal and the goal of their High-Performance Team is to keep the producers in the Green Zone (focused on money-making strategies and activities) 80% of the time.

Renewals. Wingers live by either “renew as is” or “go to market.” On their A and B accounts, the renewal is a significant annual event. The process starts way later than it should, the markets are all shopped, and the quotes are scrambled and put together at the last minute, then given to the clients at the 11th hour. Ever wonder why the mid-market account says the renewal process is one of the two things that drive them crazy?

Winners have a continuation process that makes the renewal a non-event. As you’ve heard us say many times, you don’t renew accounts, you continue relationships. Continuations are based upon meeting and exceeding the client’s expectations by providing a superior client experience.

So, are you—or is your agency—a winger or a winner? As always, it’s your choice.

Listen to Winner or Winger with Brent Kelly and Roger Sitkins on the Agent Leader podcast.