Do You Simply Speak Or Do You Have Influence 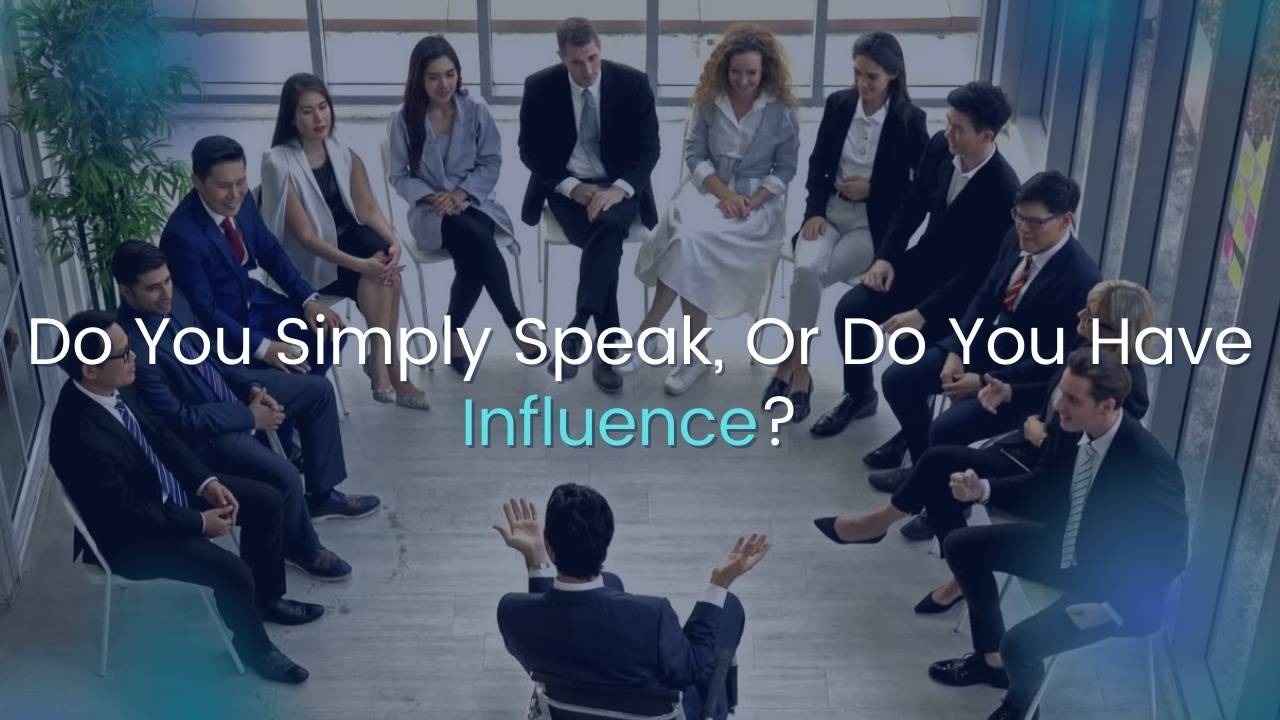 Knowing The Difference Can Help You Succeed

On a scale from one to 10, how important is communication for insurance professionals? When I ask this in leadership camps, the answer is almost always 10. My follow-up question is this: If it’s the most important skill, how focused are you on getting better at it? Usually, the answer is somewhere between two and five. Obviously, there’s a huge disconnect between knowing the importance of being a top-notch communicator and actually developing and leveraging that skill in order to be successful.

It’s important to keep in mind that the goal of high-level communication is not to convince, but to connect, serve, and to add value. To quote the famous philosopher whom I call Mom, “Those convinced against their will are of the same opinion still.” I first heard her say that decades ago, and it is just as true today as it was when I was growing up. No one responds well to being told something is true unless they can see it or they (already) believe it.

So if we can’t convince Future Ideal Clients to buy from us by telling them what they need, how can we succeed? I believe the key to conveying our knowledge and expertise isn’t what we communicate, but how we communicate. While there are many ways to do it, effective communication really comes down to three key functions: asking provocative questions, actively listening, and then responding.

A common assumption is that communication is all about speaking and, as an afterthought, asking a couple of questions. However, it should be the other way around. In reality, questions are the keys to unlock doors and inspire action. In the words of the late martial artist Bruce Lee, “A wise man can learn more from a foolish question than a fool can learn from a wise answer.”

Did you know that the average 4-year-old asks hundreds of questions every single day? Believe me, I do! Right now, I have a 3-and-a-half-year-old and four others who have passed that milestone, so I understand it’s annoying to continually hear them ask, “Why? Why? Why?” But did you ever stop to ponder why they ask so many questions? It’s because they’re naturally curious and eager to learn. They’re completely open to new experiences and interested in discovering the world around them.

Sadly, starting in our teens we begin to ask fewer questions, mainly because we think we know everything. Further, we begin to lose our curiosity out of fear of looking stupid. We’re afraid that if we ask too many questions, others will doubt our competence or scope of knowledge. As an example, when I started in the insurance business in my early 20s, I had to ask a lot of questions because I knew almost nothing about the industry beyond the basics.

Then, as I got more experienced, I asked fewer and fewer questions, and became less curious. Instead of understanding their value system, I started sharing mine. I stopped asking, “What do you need most? What do you value in this product?”

I can tell someone what I think they need to know, or I can allow them to tell me what they need. Which one do you think is more effective? Remember, when we don’t ask questions, we often make assumptions that may be construed as arrogance and indifference.

At this point, you may be wondering what kinds of questions you should ask. I find there are three specific types:

If you’re reluctant to solicit a referral, here’s a pain-free way to ask for one when speaking with your best clients. “On a scale of one to 10, how likely would you be to refer a friend or associate to us?” If they give you an eight or higher, they have just granted you permission to ask for a referral. At that point, you can thank them for their feedback and present them with a list of potential clients. However, if they give you much less than an eight, you know there’s an issue. Thank them for their honesty, and understand they’re giving you a valuable opportunity to ask them what you can do to improve. This will allow you to work on your deficits, rather than ignore them.

Do you listen to reply or do you listen to understand? Too often, we know exactly how we’re going to respond to the person who’s speaking, even before they’re finished. No matter what the other person is saying, the “listener” doesn’t hear a word because they’re too busy mentally rehearsing the points they want to make. While it’s something we’ve all done, it’s a behavior we need to eliminate.

I believe the key to being a good listener is best expressed by author Stephen Covey: “Seek first to understand, then to be understood.” In other words, focus your attention on what the speaker is saying and then be sure to ask questions. Seeking additional information demonstrates that you’re not only actively listening, but genuinely interested in what the other person is saying.

Another key to active listening is to delve beyond the superficial. Don’t let the first answer be the last answer! If you don’t go below the surface, you’re likely to make inaccurate assumptions. To prevent that, ask questions that will help clarify what the speaker is telling you, such as, “Can you tell me more about that?” “What does that mean?” or simply, “Why?”

Quantifying questions are equally effective because they prompt persons to explain themselves in a tangible way. For example, “How would that affect your business’s profitability in terms of actual dollars?” or “How many employees would you have to lay off if (X) occurred?” Finally, always respond by reiterating what the other person has said: “Let me make sure I heard that correctly. What you said was (this).” This lets them know you were actively listening and that you heard their message accurately.

The best communicators spend only 20% of the conversation talking and 80% listening. What would your ratio be in most conversations? If you find yourself struggling to follow this guideline, remember the acronym WAIT, which stands for “Why Am I Talking?”

In the late 1960s, a UCLA psychology professor conducted a controversial study on communication and influence. He found that words accounted for just 7% of influence. That’s why email and texts are so often misinterpreted—it’s because all of the other cues are missing (which could explain the popularity of emojis and exclamation points in digital correspondence). Apparently, it’s not what you say but how you say it that carries the most weight with others. According to the study, people are far more influenced by body language (55%) and tone of voice (38%) than words alone.

If the study’s findings are accurate, they underscore the critical nature of speaker-audience proximity. After all, you’ll glean less from reading words on a page than you will from hearing the tone of a person’s voice or seeing their body language, whether in person or virtually. For example, is the speaker rolling their eyes? Are they speaking loudly out of anger or excitement? Are they pursing their lips or frowning? Are they nodding “yes” but saying “no”?

If a person’s voice, facial expressions, and posture speak volumes, what do yours say about you? Do you like the sound of your voice? Do you look poised and polished speaking before a group? Do you practice your presentations and record yourself on a regular basis? If not, you must. It’s the most effective, low-risk way to hone your communication skills. As you review each video, you’ll be able to see and hear yourself through the eyes and ears of your future ideal clients, influencers, and clients. Are you totally pleased with your performance or are you doing things that distract people from your message?

I believe there’s always room for improvement, particularly if you’re a producer or team leader. For instance, four years into my insurance career, I joined Toastmasters International to help me with my presentation and communication skills. Thanks to the organization (and countless hours of practicing and presenting), I learned how to be comfortable speaking to an audience, how to use body language to my advantage and, overall, how to be a better communicator. I still practice those skills and Roger still critiques me! In fact, we debrief after every virtual meeting.

The bottom line is that effective communication is the lifeblood for insurance professionals, yet most take it for granted. Deliberate practice leads to greater confidence, improved performance, and better results. What if you got just 1% better every week? If you were 50% better a year from now, how much better would you be?

Commit to being your best version possible and you’ll be amazed at what you can achieve.

Brent Kelly, president of Sitkins Group, Inc., is a motivating influencer, coach and speaker who has a passion for helping insurance agencies maximize their performance. He spent 15 years in the insurance industry as a successful commercial lines producer and was named one of the top 12 young agents in the country in 2012. To help your agency gain clarity, build confidence, and improve culture, please contact him at [email protected] or visit www.sitkins.com