Repeat after Me: No Remix! 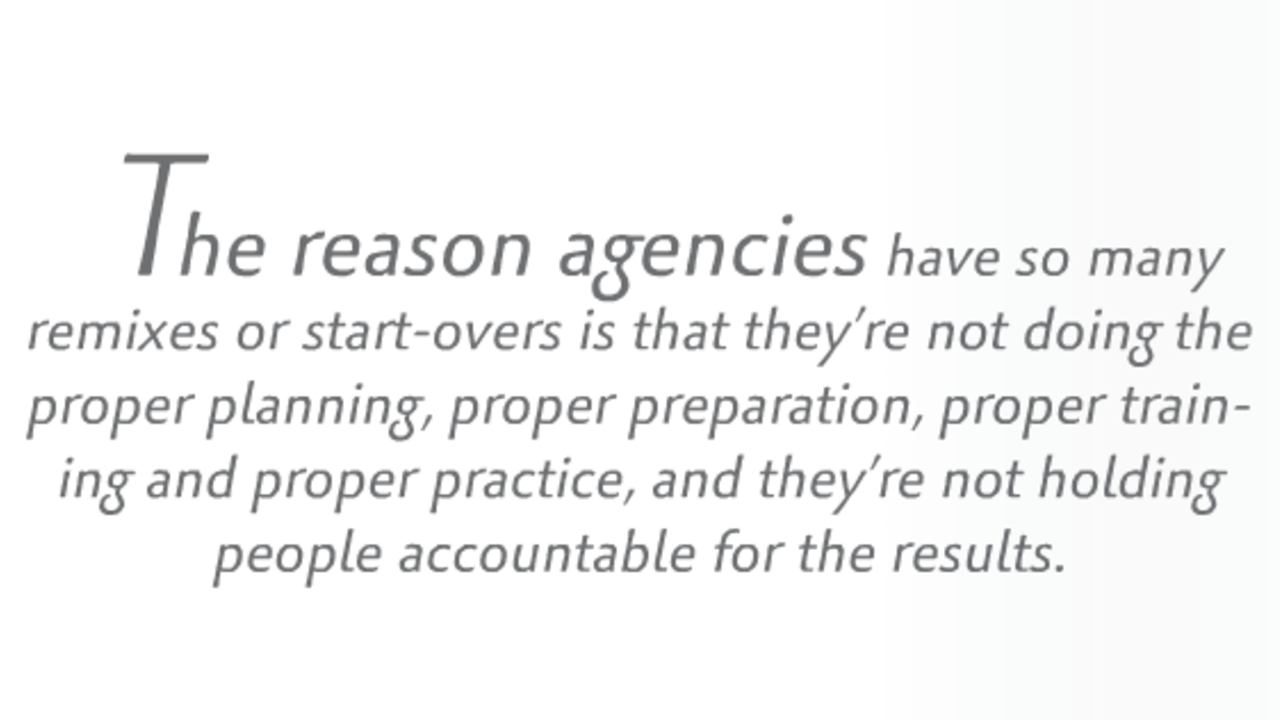 I just returned from my 11th mission trip to Nicaragua, working with Bridges to Community, several of my consulting clients and their team members, building homes in the second poorest country in our hemisphere. It’s extremely hard work but it helps us appreciate our “real jobs.”

One of the things we do is mix the mortar. First we have to sift the sand and then we add rocks, cement and water that become the mortar. Keep in mind, there are no mechanical cement mixers; this is all mixed on the ground, using shovels. The upside to this sort of manual labor is that it provides jobs for local masons. We’re just there to assist them.

The masons decide how much of each ingredient will be needed for the day, such as eight wheelbarrows of sand, five wheelbarrows of rock, fifteen buckets of water and four bags of cement. However, if we don’t make enough during a particular phase of the job and we run out of mortar for whatever part of the structure we’re building, we have to do a remix. This means starting over—sifting sand, adding rock, bags of cement and water, and mixing it all with shovels on the ground. Believe me, remixing is no fun, especially when you think you’re done for the day.

On this trip, “No remix” became our team’s mantra. If we were told we needed eight wheelbarrows of something, we’d make sure we wheeled in some extra, just in case. We laughed about it, but we were dead serious about the concept behind our “no remix” chant. It meant we had to do it right the first time—or else.

The concept also applies to everything we do within our agencies. How costly is it when you have to re-do things because they weren’t done properly from the outset?

Do it right the first time

Doing it right the first time in an agency really boils down to committing to the following key things:

“Repetition is the mother of skill” is something I first heard from motivational speaker Tony Robbins. It’s true. Skill comes from repeatedly doing what you’ve been trained to do.

Only by holding people accountable can you be sure they’re doing what they said they were going to do.

The reason agencies have so many remixes or start-overs is that they’re not doing the proper planning, proper preparation, proper training and proper practice, and then they’re not holding people accountable for the results. Or they do it once, revert to their old way of doing things and then start over, again and again and again. If they had done it right the first time, there would be no need for remixes.

Most remixes stem from the improper or inconsistent use of:

These are all things that people start and then continually restart because they don’t follow the steps to do it right the first time. Eventually, this has a demoralizing effect on employees. Although they may go along with the “new way” of doing things initially, it’s only a matter of time before they begin to think, “This too shall pass.” They know that there won’t be any consequences if no one buys in, so they expect that you’ll just start over again.

A culture of accountability

A commitment to preventing remixes starts at the top. However, most agency executives are not aware that remixes go on all the time.

Years ago, in a planning session with a private client, we were discussing the various systems and procedures that we had agreed would be in place within the agency. But whenever I would ask a question about one of them, someone would say, “Oh we’re not doing that anymore.” This continued for several questions in a row before the CEO said, “Wait a minute—I thought we were still doing that.” The reality is, the agency was constantly remixing, starting and stopping and starting again without the proper planning, preparation, training or practice; and no one was being held accountable. How many things did you say you were going to do last year that are no longer in place?

Here’s a fun fact: February 9th is the day most people stop going to the gym. That’s the day gym attendance drops dramatically—fewer than six weeks after the New Year spike.

How many corporate New Year’s resolutions have you already abandoned? Put another way, how many things have you remixed so far this year? I’m already seeing it at some of the better agencies. Many of them have already recommitted to implementing plans they started on January 1st. The fact is, most owners are not very good at holding people accountable.

What accountability system do you have in place at your agency? If you strategically and behaviorally know what you want your producers and other team members to do, that’s great! Just don’t embrace the quick-start mentality and assume that once you say something, it’s automatically going to be done. Incidentally, that’s one of the chinks in my armor. When I say something, I think it’s done and move on to the next thing. But that’s only because I can depend on Janey Cahill, the world’s best Strategic Assistant and the COO of Sitkins Group, Inc., to follow up and see if things really are getting done. She’s my accountability system.

Unless you have a culture of accountability in your agency (or someone like Janey), you’re going to be doing one remix after another.

The key to eliminating remixes is to first define “doing it right.” Has your agency defined that yet? For example, what’s your agency’s “right way” of handling an audit, working with a new customer, processing a claim or addressing an accounts receivable problem? Whatever “doing it right” looks like in your agency is a reflection of the way you do business. That’s why it’s critical to spend enough time up front establishing what you want to do right and how you want to do it. That way, there are no remixes.

Another way to combat perpetual remixes is with incentive compensation. However, few agencies offer any such compensation program to help drive behaviors of those outside their sales department. That’s unfortunate because without incentives, more business just means more work. When a client leaves, the average, “unincentivized” employee rejoices in the fact that there is less work to be done.

Preventing remixes also requires an investment in training. Most agencies spend very little time and only about .4% of their revenue on training. That’s woefully inadequate. I equate it with being a professional football player and not practicing for the Super Bowl.

Ultimately, remixes aren’t just costly, they’re energy-draining and counterproductive, too. I know this from my experience on job sites in Nicaragua. Remixes were always a lot more work than if we had done it right the first time and made enough material to finish the job. Most of the time that’s exactly what we did, which resulted in a feeling of accomplishment and a sense of satisfaction.

Remixes had quite the opposite effect. The stopping and restarting left us feeling drained and dissatisfied; it was really counterproductive. The same applies to an agency remix—it’s a disruptive drain on resources.

So what will it be at your agency? Will you prepare and devote the resources to do it right the first time? Or will you have to keep doing remixes because you skimped on planning, preparation, training and practice, and held no one accountable? The choice is yours.