The Most Difficult Person to Lead in Your Insurance Agency 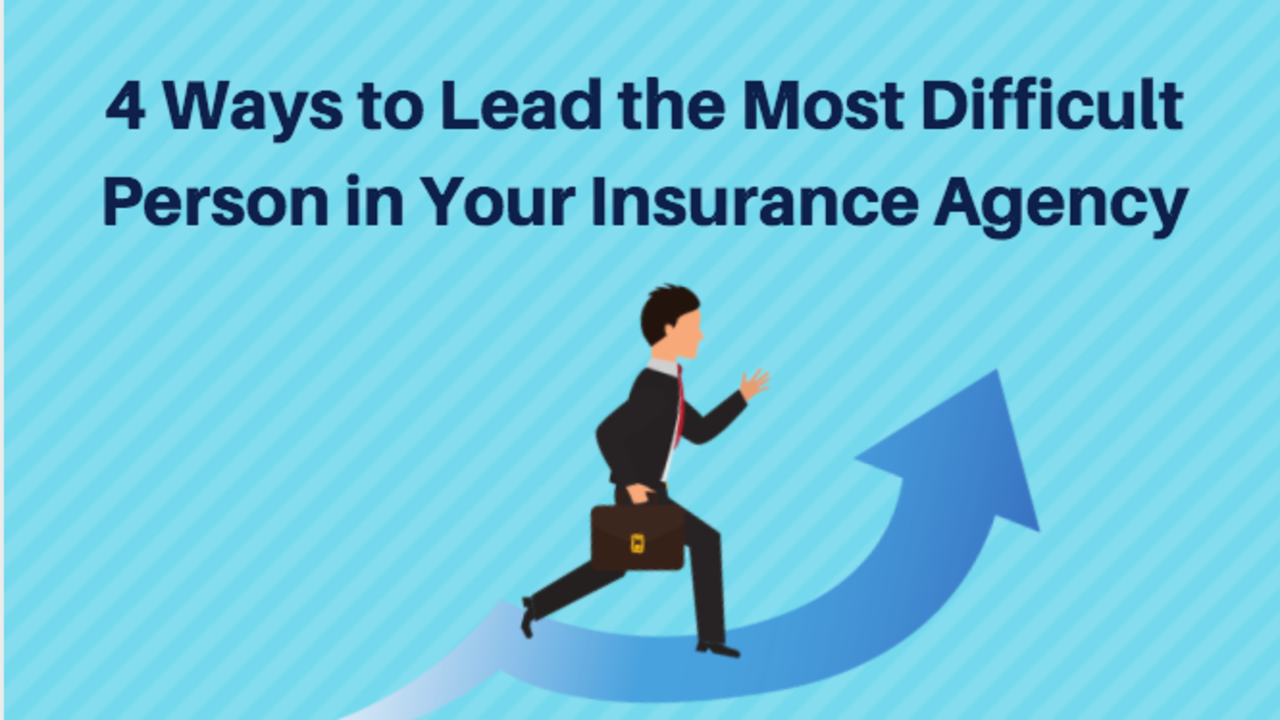 One of the questions I often get when I work with insurance agency leaders is, “How do I best lead my team?”

Let me start by saying that unless your agency just started from scratch or you are a one-person operation, you have challenging people on your team. People with egos, people with complacency, people with drama, people with an inability to listen effectively. However, none of these challenges will be your most difficult.

The most challenging person you will ever lead is YOU.

No other person you lead will have a bigger impact to your business results.

Leadership is personal and it doesn’t get any more personal than leading yourself.

Many of us are our own biggest fans….and our own worst critics. In other words, we don’t often see ourselves the same way others do. And if leading yourself wasn’t hard enough, as a leader you must realize that everyone is watching.

Your agency team is watching when you show up, when you leave, if you follow-through, the way you treat others, your values, and if you understand and respect them. That all depends on how you are first leading yourself.

As a leader, you set the tone for the culture of your agency.

While that may seem like a great deal of pressure, it is also a tremendous opportunity.

So how can you best lead yourself and ultimately be a better leader to your insurance agency team?

The best leaders are servant leaders. That means you must be more than just a leader, you also need to be a follower.

Have you ever worked for a leader who was so far detached from your situation that you felt they had no grasp of your reality? Arrogant leaders are rarely effective over a long period of time. At some point your followers simple “tune out.”

To avoid being tuned out, spend time each day just serving your team, asking questions, listening, and understanding their situation. You don’t always have to have an answer or “fix” something.

An open ear is far more powerful than a mighty mouth.

Not only will this make them feel like a million bucks, you will also likely learn important ideas to make your agency more successful.

2.   Discipline starts with you

Have you ever had a conversation with someone who was offering fitness and nutrition advice that didn’t seem to match their outward appearance? How much credibility did they have? How about someone who has been divorced three times giving marriage advice, are they credible? Maybe that’s not fair, but it’s true.

The reason why self-leadership is so challenging is that the mirror doesn’t lie. Our results speak volumes.

As I stated earlier, as a leader, everyone is watching you. If you ask your team to be disciplined, you first much be disciplined or your message will fall on deaf ears.

Now understand, that as a leader, your time may not be best spent doing certain activities that your team is doing. That’s why you have a team.

However, you must be willing to put in the time, work, and effort to be the model of discipline. Agency discipline starts with you.

I am a natural quick start. In fact, on my Kolbe personality test, I scored 9 out of 10 in this category. That means I often make quick decisions, expect quick results, and often come up with way more ideas than I can implement. While there is value in thinking, and moving, fast it also has its weaknesses.

That requires patience. If you are too far ahead of others, they will eventually get frustrated and stop following. For high achievers, slowing down may feel completely unnatural, but high performing agencies are filled with leaders who value long-term success over short-term satisfaction.

Last week, our team worked with a successful insurance agency on their annual planning. Every insurance agency I work with as part of the Sitkins Network wants to sell more commission, retain more clients, and earn more profit. We have training programs and resources to help them do just that.

However, the most important thing we did over those two days was not discussing strategy and tactics, but agreeing on being accountable to each other and the entire agency team.

No matter how self-motivated you are, every one of us performs better when we are held accountable. Accountability is not simply a willingness to share your actions.

2. We don’t object to advice

Accountability is a simple as answering one question, “Did I do what I said I was going to do?”

As leaders, it can be challenging to find accountability partners as many people on your agency team don’t want to challenge your authority. However, you must welcome and encourage others to disagree with you and hold you accountable to do what you said you were going to do.

Sam Rayburn was a presidential adviser for Harry Truman when he was thrust into the presidency after the death of Franklin Roosevelt. Rayburn gave President Truman some great advice, “From here on out you’re going to have lots of people around you. They’ll try to put a wall around you and cut you off from any ideas but theirs, they’ll tell you what a great man you are, Harry, But you and I both know you ain’t.”

Who is willing to tell you the truth and hold you accountable? The best agency leaders are the ones who seek the truth, even when it hurts.

Self-leadership is the most challenging form of leadership. It’s also the most important aspect of leadership. I love this quote, “When a leader doesn’t inspect himself, the people don’t respect him.”

When you learn to lead yourself effectively others will want to willingly follow you. You will have greater influence, build a stronger agency culture, and increase your agency revenue.

Former chairman of IBM Thomas J. Watson said this, “Nothing so conclusively proves a man’s ability to lead others, as what he does from day to day to lead himself.”

Brent Kelly is an executive coach and speaker with The Sitkins Group. To learn more about the programs and services we provide agencies, visit www.sitkins.com