What Is Holding Your Agency Back? 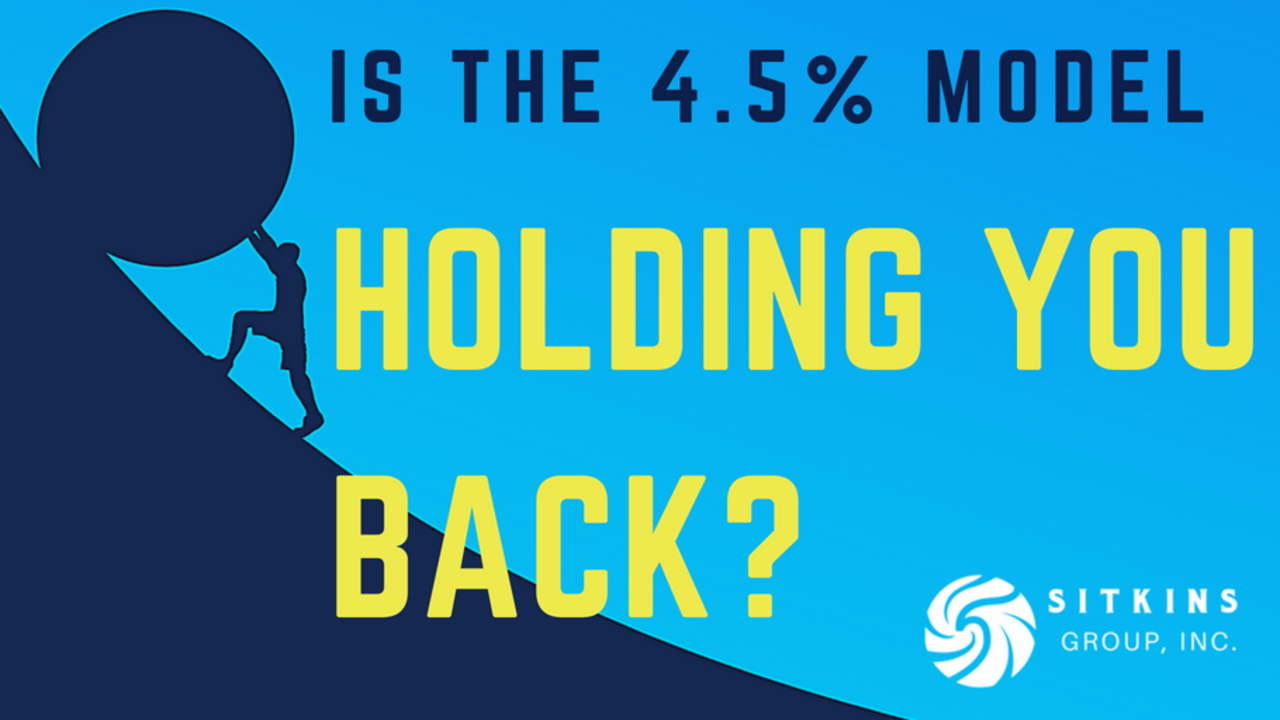 REVENUE AND PROFITS DEPEND ON FULL-TIME PRODUCERS

We see that the average producer is a part-timer at best. Even though most of them will still do okay, they’ll never be great, and at the end of their career they’ll have tons of regrets.

According to the Organic Growth & Profitability Survey conducted by Reagan Consulting, agencies experienced 4.5% growth in 2017. People got really excited because it was an improvement over 2016’s growth of 4.2%. This concerns me.

To me, 4.5% is not exciting, nor should it be to any true sales organization! What is exciting is growth that is two or three times the national average. That would be either 9% or 13.5%.

I fear that many agencies are blindly following the 4.5% Model. Although they’re not doing this deliberately, that’s the problem—they’re not aware that they’re doing it. But maybe this model is exactly what’s holding them back!

Now before I expand on this, I realize there aren’t many agency owners sitting out there saying, “I’m following the 4.5% Model!” Most simply don’t have a growth model other than the old way of selling (you know, the old Look, Copy, Quote and Pray model). Guess what? It still works! However, I believe most will agree that the distribution system and the industry overall are due to change dramatically over the next five to 10 years.

Think about operating profits of 25% plus valuations of 10 times EBITDA and you should also be excited and committed!

The crux of the matter

While that helps us pump up Quick Starts, we have to go back to the source of the problem if we hope to solve it. In this case, why have agencies grown at only 4.5%? What is this 4.5% Model? The reality is that in most agencies, there is no model. (Note: Even if you’re already growing at 6%, 7% or 8%, it’s still worthwhile to look at what’s holding you back from greater growth and profitability.)

A question I often ask at speeches and workshops is: “How many of you want to grow your business?” Naturally, all hands go up. My response: “Great! Now how are you going to do that?”

That’s why it’s so important to evaluate the root causes of low organic growth. Based on my experience, it all starts with producer productivity—or the lack thereof.

The strategies we teach at Sitkins Group are aimed at producers actually producing! As we believe that you score points only when you’re in the game, we focus on the amount of time producers spend in “producing activities.” We see that the average producer is a part-timer at best. Even though most of them will still do okay, they’ll never be great.

To achieve greatness, producers and their teams must have a structure that allows them to invest 80% of their time and energy in the Four Key Money-Making Activities: Sales, Relationship Management, Continuations (not renewals) and Pipeline Development (remember, you’re after Future Ideal Clients, suspects or prospects).

I hope you remember the 12% Factor, which is a huge litmus test for you and your agency. Are your producers spending (investing, actually) 20 hours a week face-to-face with clients, future ideal clients and centers of influence? For our younger “producers in training,” a lot of this time is spent smiling and dialing or using digital technology to build their pipelines. So, 168 hours a week x 12% = 20 hours, which is only 50% of an average workweek!

However, our research shows that the average producer spends fewer than 10 hours per week in those four key areas, and that’s less than 6% of the 168 hours in every week! You adjust for evenings and weekends, but how much time are you really spending doing things that will earn you money? Could the fact that our producers are not even close to being full-time salespeople be part of the problem? (Answer: Yes!)

At the first-ever Virtual Roundtable we recently held for agency leaders, one of our long-time clients and friends said that he now has two classes of producers: full-time and part-time. His part-timers (based on actual results) are paid substantially less on their renewal books of business, which I think is a good idea. If they’re not generating enough new business to offset the escalating costs of servicing their accounts, then they’re not really contributing to the agency’s growth and profitability.

Here are some additional reasons why many producers are only part-timers:

In contrast, Results Magnets always focus 100% on creating positive results. They   refuse to hide behind activities and they demand more of themselves than anyone   else ever would. They question everything they do by asking: “Does this have   anything to do with creating a positive result or am I just being busy?”  Underachievers love being busy!  It’s their ultimate excuse. It’s how they justify their   poor performance.

By now you’ve probably gotten the message, which I want you to know is not meant to be negative, nor is it intended to berate or belittle anyone. However, if you recognize yourself, I hope I’ve gotten your attention.

As I’m sure you’re aware, having options is part of the beauty of this business. You can choose what you want to do. You can follow the 4.5% Model and do okay if you can accept the possibility of having some major regrets when you retire. Or you can commit to the 9% Model, the 13.5% Model or any other higher-growth model and have no regrets!

The best agency leaders understand the importance of high performance and the positive impact it can have on their clients, colleagues, carriers and the entire community. As a result, the best in our business strive to accomplish three goals: Sell More, Retain More and Earn More. You can do the same if you’re willing to lead more and invest more in your future.

As always, it’s your choice!

Roger Sitkins, CEO of Sitkins Group, Inc., is the nation’s number-one “Agency Results Coach.” He established The Sitkins Network™, a territorial exclusive network of high-performing agencies, and The Better Way Agency, a web-based training program that shows agency owners ways to make significant improvements in all areas of the agency. To learn more, please visit www.sitkins.com and follow us on Facebook, LinkedIn and Twitter.

You can also sign up for our Podcasts and Blogs so you don't miss any updates on how to sell more, retain more, and earn more.